25 years after the end of authoritarianism, Taiwan is still struggling to come to terms with its past. 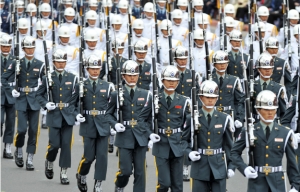 Chen Shin-chi smiles through his dentures and drops down to the dusty floor of a jail cell to do a push up. He looks up at the crowd watching him, smiles again, and flips on his back to perform sit-ups, his body stretching almost the entire length of the three-by-two-meter cell. In 1968, he lived in one of these windowless boxes for four months during his five-year imprisonment by the then-authoritarian Taiwanese government. Today he gives tours of his former hell, now a human rights museum 10 minutes outside Taipei.

Chen was one of tens of thousands of suspected spies and Communists who were imprisoned, tortured, or executed by the Taiwanese authoritarian government during a brutal, four-decade period of martial law known on this island nation as the White Terror. It was one of the longest periods of martial law in the world. 25 years after that authoritarian regime abruptly ended in 1987, a nascent and partisan democracy is still struggling to address its past. (This past week, Taiwan celebrated the 101st anniversary of the founding of the Republic of China — though there was little mention of the victims of past human rights abuses.)

Taiwan has never had a non-partisan truth and reconciliation process. No democratically-elected president has formally suggested one, according to human rights advocates and government officials. Instead, transitional justice has been left to the politicians of Taiwan’s two main competing political parties to implement as they see fit. “Human rights [in Taiwan] has become a political battlefield,” says Lung Ying-tai, a famous Taiwanese cultural icon who was recently appointed the head of the nation’s newly formed Ministry of Culture. “They chose whatever would bring them immediate credit. It’s calculating.”

The Nationalist Party that ruled Taiwan both in martial law and guided it to democracy mostly avoided the topic of its bloody past. Democracy didn’t come easy or naturally for the former authoritarian government, Lung says: “There was a slow, loosening up of the island.” It took intense social pressure to push the country’s first democratically elected-president, Lee Teng-hui, to form a committee to look into a massacre committed by the Nationalists in 1947 that launched the White Terror. In some ways, he was no different from all the others in the country who couldn’t believe martial law was really over, says Naiteh Wu, a Taiwanese researcher and human-rights advocate: “Lee Teng-hui was still struggling with his own past at the time he became president.”

And the pro-independence opposition party, the Democratic Progressive Party (DPP), hasn’t had it much easier. A monumental shift in the political landscape occurred when the DPP, headed by the fiery, staunch anti-China president, Chen Shui-bian, was elected in 2000. The country assumed that his election would also change the transitional justice process because of his record as a pro-democracy activist while Taiwan was still under martial law. But as Wu and others like him began digging into the pasts of victims of the White Terror, they found that many had made proud declarations of their Communist ties on their deathbeds — meaning that the prisoners were, in fact, guilty of the formal charges the Nationalist government had brought against them.

This complicated matters for Chen, who could no longer vilify the martial-law Nationalists because it would put him on the side of their Communist victims, says Chang-ling Huang, a professor at Taiwan National University. This would have been politically inconvenient for Chen, whose party, which is opposed to unification with the People’s Republic of China, also has a strong anti-Communist bent. “The [old] narrative was that these people are just historical bystanders, they didn’t do anything wrong,” says Huang.

Despite the uncomfortable truth, President Chen did institute a comprehensive reparations system. The move is seen as one of Taiwan’s most successful official transitional justice programs. (Critics say it’s the only one.) Late in his presidency, he made another move to make amends for the government’s past crimes by turning the vacant, abandoned Jing-Mei prison into a “human rights park,” the one that former political prisoner Chen Shin-chi now gives guided tours in. But the park dedication in 2007 coincided with a corruption scandal that eventually landed President Chen and his wife in prison, once again complicating the process.

After alternating periods of rule by both political parties, the Taiwanese were beginning to realize their past could not be easily taken on by any one political group. And maybe it shouldn’t be that way, some say. “I think it’s demanding too much to ask for one party to really be the moral hero,” says Culture Minister Lung. But justice in the hands of democracy, she maintains, is still good for the country, in part because each new leader takes another step toward helping the nation heal. Some even say now that the current president, Ma Ying-jeou, apologizes too much for the 1947 massacre that his own party perpetrated, and which his predecessor almost failed to acknowledge.

But justice is nothing without a judicial system people can trust. In Taiwan, many believe their judicial system is tainted with people loyal to Taiwan’s conservative Nationalist party. It’s a fear, says Professor Huang, that is not unfounded, considering that the party controlled virtually every aspect of political life for four decades. Indeed, people like former political prisoner Chen note with bitterness that some of the most egregious crimes from the martial law period have gone unsolved.

And then there’s the delicate question of how to view the man who started it all, Generalissimo Chiang Kai-shek. An elaborate, reverential memorial that the authoritarian government built for him after his death in 1975 is one of Taipei’s key tourist attractions. His bald likeness is immortalized in a bronze statue resembling Abraham Lincoln’s in Washington, D.C., and tours of the museum devoted to him are heavy on artifacts and light on historical context. His statue even stands tall at many schools across the country. “For a democratic country, it’s kind of ridiculous,” Huang says.

Perhaps time will lead to a more nuanced discussion about how Chiang is viewed. But an even more urgent task, human rights advocates say, is to document the histories of those who lived and suffered during martial law — a move many see as the third prong of Taiwan’s justice process. In the absence of a formal government plan, people like researcher Wu have stepped in. He and several colleagues formed a nonprofit called the Taiwan Association for Truth and Reconciliation several years ago to interview survivors, because, he says, “the government wasn’t doing anything to preserve those memories.” (It was some of these interviews that brought to light many victims’ unapologetic Communist ties.)

A lack of leadership from the government may be changing with the appointment of Culture Minister Lung, who this summer announced a national initiative to do the same. “This is an island of untold stories,” she says. But it’s a slow-moving project that doesn’t have time on its side. Many aging victims aren’t fluent in the official language of Chinese, preferring instead to speak in the Japanese of their former colonizers. Still others, who spent most of their lives under martial law, have been conditioned by experience to stay silent about what they long suffered. Still, Lung says that the value of the project transcends the challenges. She is determined to put every resource she has into making it succeed, including delivering mementos of long-lost loved ones herself.

It’s a step in the right direction for a government that had previously taken no steps at all, according to former political prisoner Chen, who says that recording Taiwan’s collective memory is one of the most important things the country can do to right its wrongs. “We are getting back to the dignity of being a human being,” he says. Encouraged by Lung’s attempts to record the voices of the past, he is writing his own book about his imprisonment. One day, he hopes, it will be on display at the very place he was held behind bars.

But simply documenting the unadulterated truth is not enough, he insists. Chen, along with former political prisoner Lee Chen-sung, says that Taiwan needs to develop an open and honest school curriculum about its past. As it stands now, Taiwan’s martial law is seen as too touchy to be anything more than a history lesson. “We don’t talk much about it in school — it’s too political,” says one of the park’s English-speaking tour guides, Stephen Huang.

The dearth of a comprehensive curriculum is one of many signs that, for Taiwanese society, its past remains an awkward void. Lung uses the image of a poorly treated wound that has begun to scar. “Overall, Taiwan has made huge progress,” she says, “But if you ask me, is it enough? Of course not.”

But she and others are asking for more time to get Taiwan’s justice process back on track. Taiwan, she says, is still searching for the right balance of governing today while coping with yesterday. She draws a comparison from her husband’s native Germany, which ripped open the wounds of Nazism for all of society to see. “By comparison, the Taiwanese have been dealing with it rather calmly,” she says. “Calmly and kindly.”

She seems confident that a patient path will eventually lead to the right one. “When the ordinary citizen can take a Sunday walk with their children and tell their children stories about what human beings are capable of doing, about what’s right and what’s wrong — that’s when this issue is no longer a kind of sore in your skin,” she says. “Then it’s just a part of a healthy person.”